It’s the most expensive model BMW has ever produced. Loosely styled after the company’s 1959 507 sports car, it has an all-aluminum body attached to an aluminum space frame. It’s powered by a 400-horsepower V8 engine taken from the M5 performance sedan. It has a six-speed transmission, a 0-100 km/h time of about five seconds, and an electronically-governed top speed of 250 km/h. Pierce Brosnan drove (and destroyed!) one in the last James Bond film, The World Is Not Enough, and BMW will be making them in very limited numbers. The price tag is $192,000 and we’ll be lucky if 50 make their way to Canada. 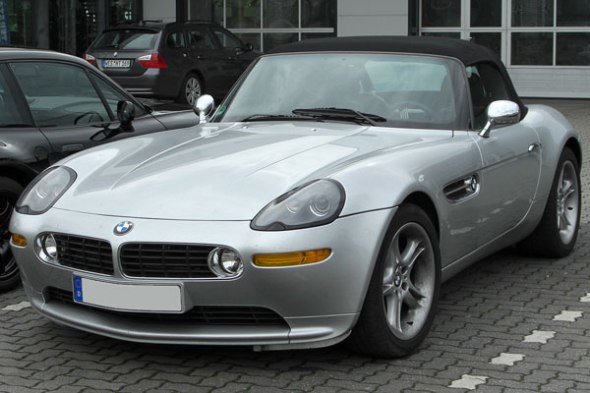 So what’s it like to drive? In a word, exhilarating. Once you slide in behind the retro-styled dashboard and hit the starter button, you find yourself with seemingly unlimited amounts of power to play with. Typically, the transmission snicks from first into second, and synchromesh is less than refined. The engine has a muted kind of animal growl to it, and once prodded, the car leaps ahead like a grand prix racer. But this is no tire-burning hot rod. Thanks to a traction control system (again, taken from the M5) and oversized four-wheel ventilated disc brakes with ABS, everything is under control and the Z8 could be the most civilized 400-horsepower two-seater on the market. Although power comes on instantly, there is also a power band around 4500 rpm that feels like a turbo boost. The Z8 redlines at 6600 rpm, and those last few thousand rpms are a real kick in the pants. This is the kind of car you drive as far away from coffee shops as possible, because you’re speeding before you even have a chance to glance at the tach.

Interior accoutrements are surprisingly spartan. No vast expanses of exotic wood trim, no unnecessary use of leather. In an understated display of industrial chic, all surfaces are either brushed or painted aluminum, and all the controls are undersized, with a wire-spoked steering wheel and an ignition key mounted high on the dashboard. Like the Honda S2000, the Z8 has a starter button, and the instrumentation is located in the middle of the dash with extremely cool orange back-lighting. Elbow room is at a premium, and the top is deployed via a console-mounted button. The Z8 also comes with a Global Positioning System with verbal prompts, but I would suggest that you’ll be going to fast for it to be of any use. A contoured roll bar houses the headrests and there is a zip-up wind protector as well.

Definitely prettier than BMW’s Z3 roadster, the Z8 abounds in exterior retro styling cues: side vents, split front grille with built-in driving lights, flared wheel arches, and nice wide 18-inch wheels and tires. Not as striking as its predecessor, the Z8 is actually a very subtle looking automobile and kind of blends in to the background. It doesn’t stick out like – say – the Plymouth Prowler or Audi TT.